The Pelagos Sanctuary for Mediterranean Marine Mammals is a special marine protected area extending about 90.000 km2 in the north-western Mediterranean Sea between Italy, France and the Island of Sardinia, encompassing Corsica and the Archipelago Toscano. 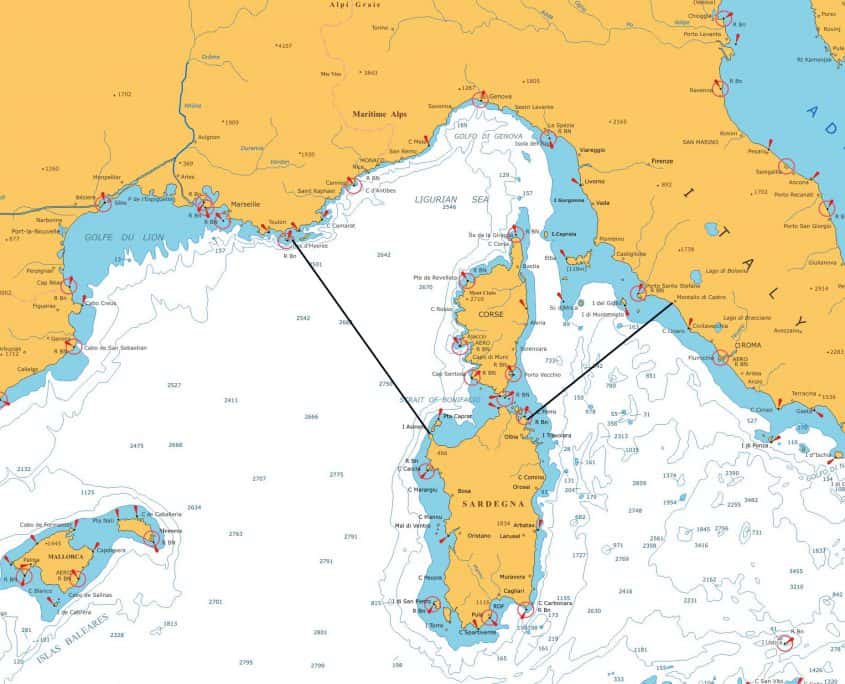 The Pelagos Sanctuary for Mediterranean Marine Mammals is a special marine protected area extending about 90.000 km2 in the north-western Mediterranean Sea between Italy, France and the Island of Sardinia, encompassing Corsica and the Archipelago Toscano.

The Sanctuary waters include the Ligurian Sea and parts of the Corsican and Tyrrhenian Seas, and contain the internal maritime (15%) and territorial waters (32%) of France, Monaco and Italy, as well as the adjacent high seas (53%). Coastlines bordering on the Sanctuary are predominantly rocky, with the exception of eastern Corsica and Tuscany, where they are mostly flat. Accordingly, within the Sanctuary area the continental shelf is wide only in correspondence of such limited coastal plains, whereas it is mostly narrow and disseminated with steep, deeply-cut submarine canyons elsewhere. The western offshore portion of the Sanctuary consists of a uniform abyssal plain 2500-2700 m deep, however east of Corsica the sea bottom is shallower (1600-1700 m) and uneven. Compared to the rest of the Mediterranean, this marine area is characterised by very high levels of offshore primary productivity, caused by the interplay of oceanographic, climatic and geomorphological factors. A dominant cyclonic current, flowing north along Corsica and Tuscany and thence hugging the coast of Liguria and mainland France in a westerly direction, creates a permanent frontal system which acts as a boundary between coastal and offshore waters. Intense biological activity is generated along this boundary by the dynamics of the water masses associated with the front. Such phenomena are seasonally and intermittently reinforced by vertical mixing and coastal upwellings, generated by the prevailing north-westerly wind (“mistral”), which lift up from the deep waters into the euphotic zone nutrients and organic substances contributed by rivers, most notably the Rhone. Consequent high levels of primary production, with chlorophyll concentrations exceeding 10 g m-3, support a conspicuous biomass of highly diversified zooplankton fauna, including gelatinous macrozooplankton and swarming euphausiid crustaceans (krill), Meganyctiphanes norvegica. Zooplankton, in turn, attracts to the area a various levels of predators, mammals included.

The Sanctuary contains habitat suitable for the breeding and feeding needs of the entire complement of cetacean species regularly found in the Mediterranean Sea; these include fin whales Balaenoptera physalus, sperm whales Physeter macrocephalus, Cuvier’s beaked whales Ziphius cavirostris, long-finned pilot whales Globicephala melas, Risso’s dolphins Grampus griseus, common bottlenose dolphins Tursiops truncatus, striped dolphins Stenella coeruleoalba, and short-beaked common dolphins Delphinus delphis. Two such species, fin whales and striped dolphins, numerically predominate in the Sanctuary, and accounted for over 80% of all cetacean sightings made during summer cruises conducted in the area between 1986 and 1989. About 3,500 fin whales are found in the western Mediterranean, most of which concentrate in the Corsican-Ligurian-Provençal Basin in summer to feed on krill, although whales can be observed there year-round. Striped dolphins are the most abundant cetaceans throughout the Mediterranean offshore waters; in the Sanctuary their numbers are 20,000-30,000, and accounted for 60% of all cetacean sightings in 1986-89. The remaining species, although less important numerically, are also regular components of the Sanctuary’s cetacean fauna; these include deep-diving teutophagous odontocetes such as sperm whales, long-finned pilot whales and Risso’s dolphins, frequenting both offshore and slope waters, and Cuvier’s beaked whales, favouring specific areas overlying submarine canyons; now rare and endangered short-beaked common dolphins, found at intervals in offshore waters, often associated with striped dolphin groups; and predominantly coastal bottlenose dolphins, frequenting mostly the shelf areas surrounding Corsica, northern Sardinia, the Tuscan Archipelago, and continental France. The only other marine mammal found in the Mediterranean, the monk seal Monachus monachus, was extirpated from the Sanctuary area in the mid 20th century, but could theoretically re-colonise its shores in the future if population numbers were to increase in areas where this pinniped still exists, and should human encroachment of its critical habitat in the Sanctuary be lowered to levels acceptable to this shy mammal.

Such remarkable cetacean faunal diversity must coexists in the Sanctuary with very high levels of human pressure. The greater part of the coastal areas bordering on the Sanctuary, particularly on the mainland, is heavily populated and disseminated with large and medium-sized coastal cities, ports of major commercial and military importance, and industrial areas. Furthermore, the entire Sanctuary coastal zone contains important tourist destinations, thereby subject to considerable added human pressure during the summer months. As a consequence, a range of diverse human activities exerts several actual and potential threats to cetacean populations in the Sanctuary, including: habitat degradation, regression and loss caused by urban, tourist, industrial, and agricultural development, also associated with pollutant input in correspondence of the larger agglomerates and river mouths; disturbance from intense maritime traffic (e.g., from passenger, cargo, military, fishing and pleasure crafts), particularly high in summer, as well as from a burgeoning whale watching industry, from military exercises, research activities at sea, and from seismic oil and gas exploration; a growing risk of collisions with vessels, also in connection with the increase of high-speed passenger transportation; and mortality caused by the accidental entanglement in pelagic driftnets, which continue to be used in the area in spite of a ban on driftnetting imposed on fleets of European member states.

The following two publications provide a description of the rationale behind the initial proposal and an overview of the challenging process leading to the creation of the Pelagos Sanctuary:

The history of Pelagos: project for the creation of a Biosphere Reserve in the Corso-Ligurian Basin

In 1990 the Tethys Research Institute proposed to the “European Association Rotary for the Environment” a project for the establishment of a marine protected area, a Biosphere Reserve, in the high seas encompassing the most important habitat for cetaceans in the region. The rationale behind the proposal, which was named “Project Pelagos”, included: the ecological representativeness of the area, its high species diversity, its intense biological activity, the presence of critical habitat for a number of pelagic species including cetaceans, and the opportunities that the area offered to baseline research.

Most importantly, the proposal openly intended to challenge the mainstream legal notion of the time that establishing a protected area in the high-seas was impossible. “Project Pelagos” envisaged the creation of a Biosphere Reserve in the high seas of the Ligurian-Corsican-Provençal Basin, as well as the establishment of an international authority, headquartered in the Principality of Monaco, responsible for the sustainable management and conservation of the basin’s natural resources. With the support of the Rotary Clubs of Milan, Monaco and Saint Tropez (France), the European Association Rotary for the Environment and Tethys presented “Project Pelagos” to the public in Monaco in March 1991, at the presence of Prince Rainier III, who granted the support of the Principality and recommended that a sanctuary for cetaceans be eventually created in the Ligurian-Corsican-Provençal basin through a trilateral agreement among France, Italy and Monaco

The Tethys Research Institute proposes the” Pelagos Project”, envisaging the creation of a Biosphere Reserve in the Corso-Ligurian Basin, which has the highest sighting frequency of cetaceans and possibly represents the richest area in the Mediterranean Sea. The Basin is most likely to be the principal feeding ground for fin whales in the region

The Ministers of the Environment of France and Italy, and the Minister of State of the Monaco Principality, signed in Brussels a joint declaration for the institution of a Mediterranean Sanctuary for the protection and conservation of marine mammals.

1998 – One step forward for Mediterranean Cetaceans

On 29 September 1998 the Ligurian Sea Cetacean Sanctuary came one step closer to life after the Italian Government officially agreed on a proposal which will be shortly forwarded to France and the Principality of Monaco.  The proposal involves the establishment of an international protected area for cetaceans in the Mediterranean Sea, approx. 90,000 km2 wide, comprised between the continental coast of Italy, Monaco and France, Corsica, and northern Sardinia.  Aims of the Sanctuary will be, among other things, to monitor cetacean population trends, facilitate the enforcement of existing legislation to curb pollution, regulate a budding whale watching industry, and increase awareness among the general public.  Driftnets should no longer pose a significant threat to cetaceans in the area, as this fishing method is being phased out from European waters by the European Commission.

1999 – Italy, France and Monaco meet in Rome to sign the Agreement that creates the Ligurian Sea Cetacean Sanctuary

In November 2001 the Parties to the Barcelona Convention adopted the decision of inscribing the Sanctuary in the List of the Specially Protected Areas of Mediterranean Importance (SPAMIs).

2002 – The Sanctuary Agreement enters into force

2005 – Conference of the Parties of the Sanctuary Agreement

On 7 December 2005 the Extraordinary Conference of the Parties of the Sanctuary Agreement establishes the office of the Executive Secretariat in Genoa, Italy, at the prestigious Palazzo Ducale. During the Conference, Italy proposes to include the Sanctuary in the UNESCO World Heritage List.